In 1948 the first Dutch immigrants arrived and settled in the Drayton area. They got in contact with each other and went to the Christian Reformed Church in Kitchener. Later they had services in homes of local families and were sometimes visited by the Home Missionary, Rev. Charles Spoelhof who lived in Kitchener.

By June of 1949 there were ten families and because the group was too large for house services they rented Knox Presbyterian Church in Drayton on Sunday afternoons for $2.00 per Sunday. The services were held in the Dutch language, but they did use Psalter Hymnals along with the Dutch Psalm Book. 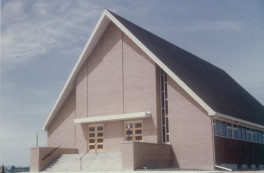 In May of 1950 the request for organizing a congregation was made and on  Sunday, June 18, 1950, the Christian Reformed Church of Drayton was formed. It consisted of 18 families and two single members, a total of 99 members. A consistory of two elders and two deacons was chosen the same day.

Some of the organized activities of the church had already begun before 1950.  Sunday School and Catechism classes, Young People’s Society as  well as a Men’s and Ladies’ Society met regularly. A Christian School Society, an Immigrant Society and a Funeral Society all came into being in the early fifties.

In 1952 a building lot was purchased on the outskirts of Drayton, formerly the site of a Methodist Church, and a basement church was built with a seating capacity of 320 people. Before the building was finished Rev. Andrew Folkema accepted the call to serve the Drayton congregation. 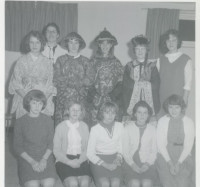 There was much growth in the Drayton CRC between 1952 and 1963 and the church was strengthened through the ministry of Rev. Folkema, Rev. Albert Van den Pol and Rev. Lambert Doezema. Because the building was filled to capacity, the decision was made, in 1962, to remove the basement church and to build a larger church. During that time the Drayton Town Hall was used for worship services. The dedication of the new building took place in April 1964.

In September 1967 Rev. Henry Lunshof was installed as our pastor. He was followed by Rev. Adrian Van Geest in July 1972 and Rev. Dirk Velthuizen in 1978. During this time English became the predominant language in our worship services but until 1980 a Dutch service was held every Sunday afternoon in the basement of our church.

In 1980, 30 families left our congregation to form the new Palmerston Christian  Reformed Church, together with 10 other families.

Some structural changes have also taken place – in 1984 a building program was begun to make more room for the different church ministries.

In 1989 Rev. David Tigchelaar came to serve the Drayton congregation, followed by Rev. Gerrit Bomhof who was installed in August 1998. In June 2007 we welcomed  Rev. H. John Vanderburgh. 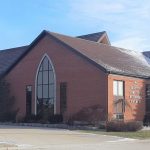 A substantial renovation was completed in 2008. The large fellowship hall is not only used for weddings, family gatherings, congregational meetings/potlucks, and our various church programs, coffee and fellowship is enjoyed every week after the Sunday morning service.

After Pastor John Vanderburgh was called to his next congregation, we decided to delve deeper into who we are as the Drayton Christian Reformed Church. Pastor Les Kuiper joined us from 2012 to 2014 and led us through a transitional ministry. As a church family we updated our Mission, Vision and Values statements. New documents were formed: Agreeing and Disagreeing in Love; Covenant of Leadership; and a Strategic Ministry Plan. Once Pastor Les’ time with us was completed, Pastor Paul Droogers joined our church family in September 2014. Jake Snieder also became our Youth Pastor from 2016 to 2018, and we anticipate an Associate Pastor in the near future.

Throughout the years, God has richly blessed the Drayton Christian Reformed Church. We seek very much to be a church fully integrated into Canadian society where people of all backgrounds feel welcomed and can discover a fellowship in which they may hear God’s word proclaimed and exercise the gifts and talents with which they have been blessed by God.

We praise God for the vision that he gave to our parents and grandparents and thank him for his faithfulness. Every week we may come to worship him and daily we experience the communion of believers. We have been able to support mission fields and participate in and support a variety of causes of the Christian Reformed Church. Several of our members have entered the ministry, served on mission fields or worked for Christian Reformed World Relief. As a congregation, we continue to strive to make a difference where we are.

“Lord, you have been our dwelling place throughout all generations.”